It’s a mash up! Vox Liminis is both our Music Guest and our ‘small voice of the month’ for August – our feature where we highlight and celebrate a person or organisation with a small voice who is making a big difference. 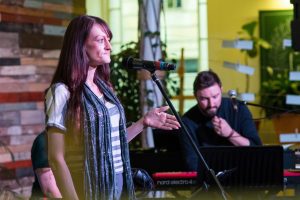 Vox Liminis is a charity that encourages those in the Scottish prison system – be they inmates or prison workers – to come together for creative projects, including writing songs about their experiences. Their ‘Things Left Unsaid’ EP was the result of six months of workshops exploring community justice, bringing together a huge cross-section of women, from prison governors to women who’ve been sentenced.

Listen to the smallVOICE team introduce Vox Liminis at 31’16 minutes in to the August podcast.

Our two featured tracks from the Things Left Unsaid EP are: 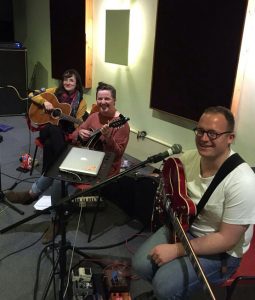 Track One: Step Into The Spaces  [13’50 minutes in to the podcast]
Performed by: Louis Abbott, Donna Maciocia and Euan Burton

Track Two: Never Got To Say Goodbye [listen at 42’30 minutes in to the podcast]
Performed by Donna Maciocia and Louis Abbott

The creativity and songwriting was part of the Distant Voices project, which Vox Liminis ran in partnership with the Scottish Centre for Crime and Justice Research, with funding (at that point) from Glasgow Community Justice Authority, the Scottish Prison Service and Creative Scotland. You can find out a lot more about the Distant Voices project on the Vox Liminis website. Steve Urquhart produced a special podcast about the project and we were delighted to be able to play an extract from that – it explores the creative experience and the importance of telling people’s stories. You can listen to Steve’s podcast in full here