Brett Nicholls is an accountant who grew up in New Zealand, but had the good sense to marry a Scottish girl. He’s now lived in Glasgow for almost half his life. 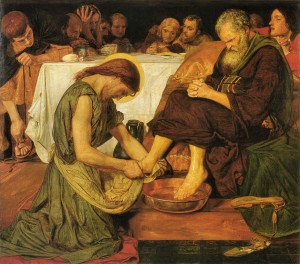 The painting that is worth a thousand words to him, and which he talks to Anne about in the podcast,  is ‘Jesus Washing Peter’s Feet’ by Ford Madox Brown.

The painting is in Tate Britain in London.

Brett Nicholls also talks about a novel by Hermann Hesse, first published
in 1932. It is called ‘The Journey to the East’ (original title: ‘Die Morgenlandfahrt’, and it is available in both German and English.